Founder and Principal Broker. Licensed since 2010. Over 200 homes sold along the Wasatch Front... 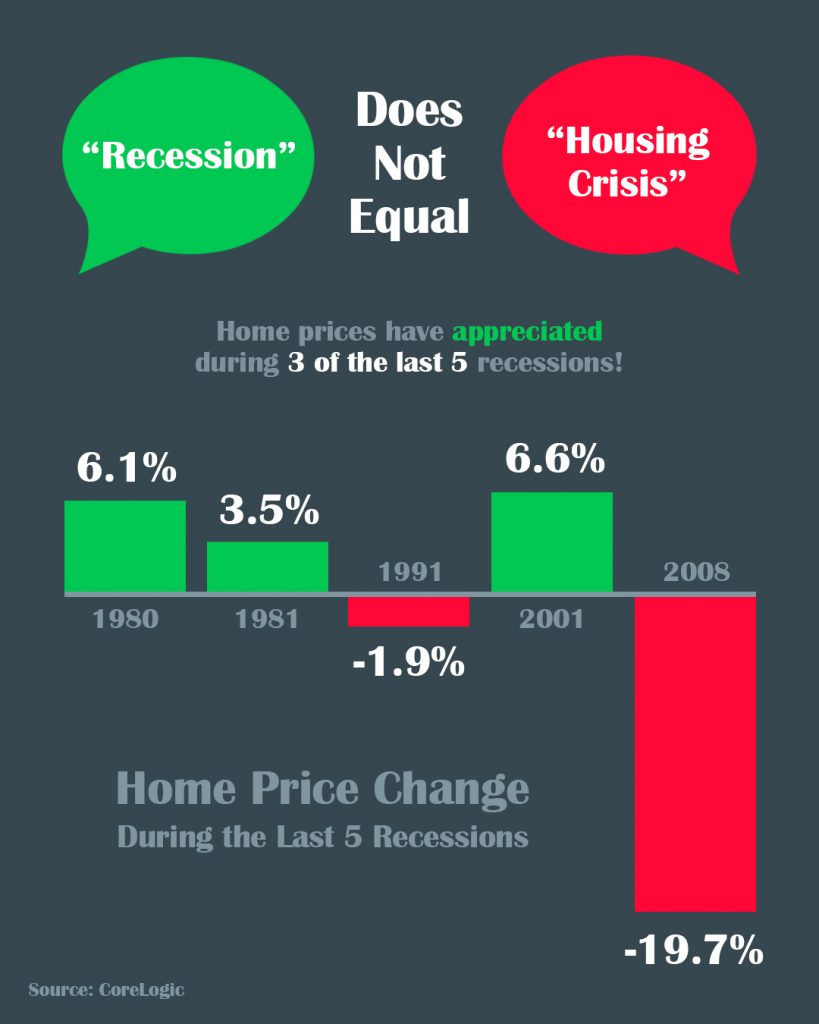 Since we are currently experiencing the longest-ever economic expansion in American history, there is reason to believe a recession could occur in the not-too-distant future. And, it does make sense that buyers and sellers remember the horrors of 2008 when they hear the word “recession.”

“With people having PTSD from the last time, they’re still afraid of buying at the wrong time.”

Most experts, however, believe if there is a recession, it will not resemble 2008. This housing market is in no way the same as it was just over a decade ago.

Zillow Economist, Jeff Tucker, explained the difference in a recent article, Recessions Typically Have Limited Effect on the Housing Market:

“As we look ahead to the next recession, it's important to recognize how unusual the conditions were that caused the last one, and what's different about the housing market today. Rather than abundant homes, we have a shortage of new home supply. Rather than risky borrowers taking on adjustable-rate mortgages, we have buyers with sterling credit scores taking out predictable 30-year fixed-rate mortgages. The housing market is simply much less risky than it was 15 years ago."

George Ratiu, Senior Economist at realtor.com, also weighed in on the subject:

“This is going to be a much shorter recession than the last one, I don't think the next recession will be a repeat of 2008...The housing market is in a better position.”

In the past 23 years, there have been two national recessions – the dot-com crash in 2001 and the Great Recession in 2008. It is true that home values fell 19.7% during the 2008 recession, which was caused by a mortgage meltdown that heavily impacted the housing market. However, while stock prices fell almost 25% in 2001, home values appreciated 6.6%. The triggers of the next recession will more closely mirror those from 2001 – not those from 2008.

What Is the Probability That Home Values Sink?

With the current uncertainty about the economy triggered by a potential trade war, some people are waiting to purchase their first home or move-up to their dream house because they think or hope home prices will drop over the next few years. However, the experts disagree with this perspective.

Here is a table showing the predicted levels of appreciation from six major housing sources: 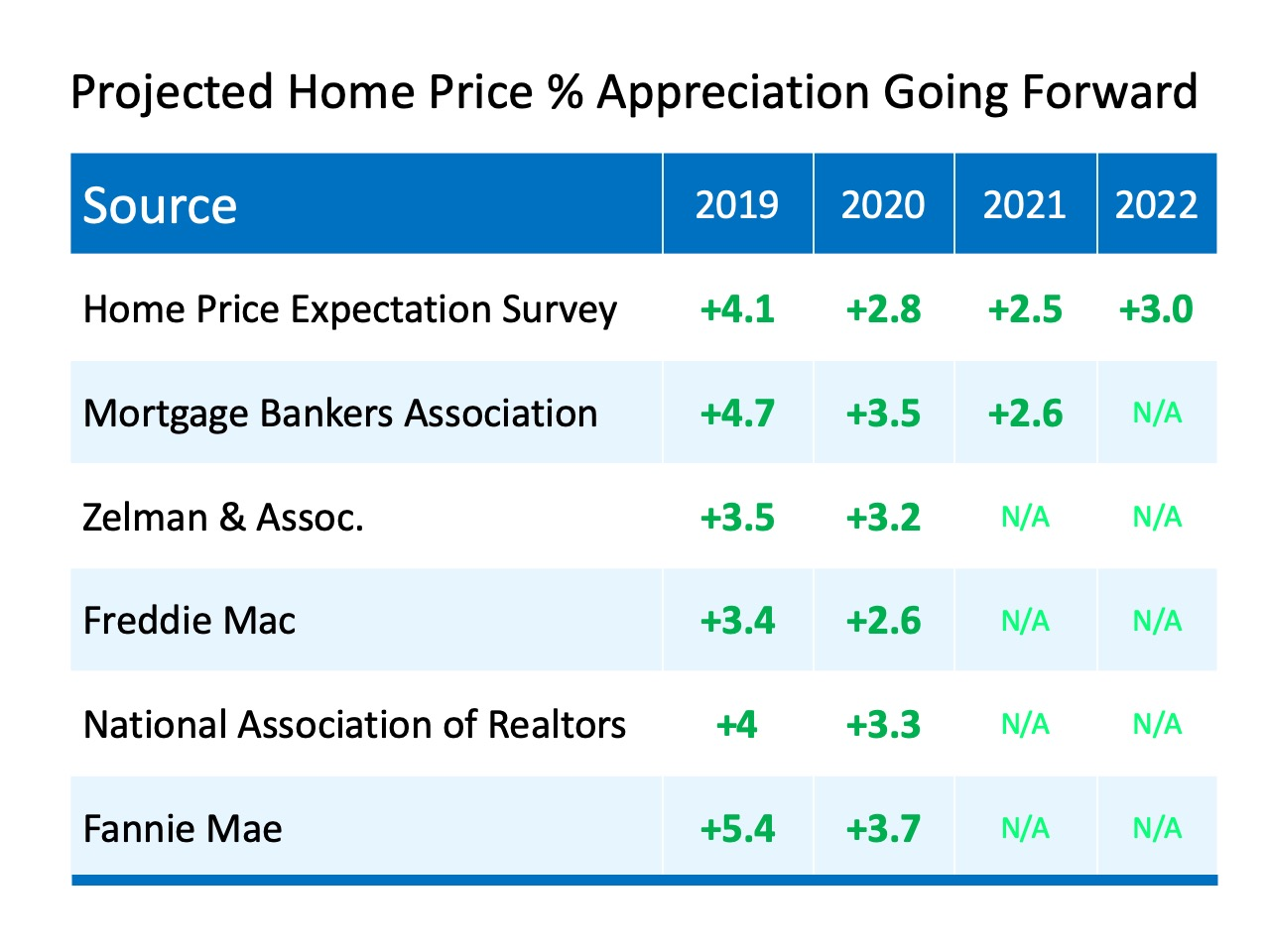 As we can see, every source believes home prices will continue to appreciate (albeit at lower levels than we have seen over the last several years). But, not one source is calling for residential real estate values to depreciate. 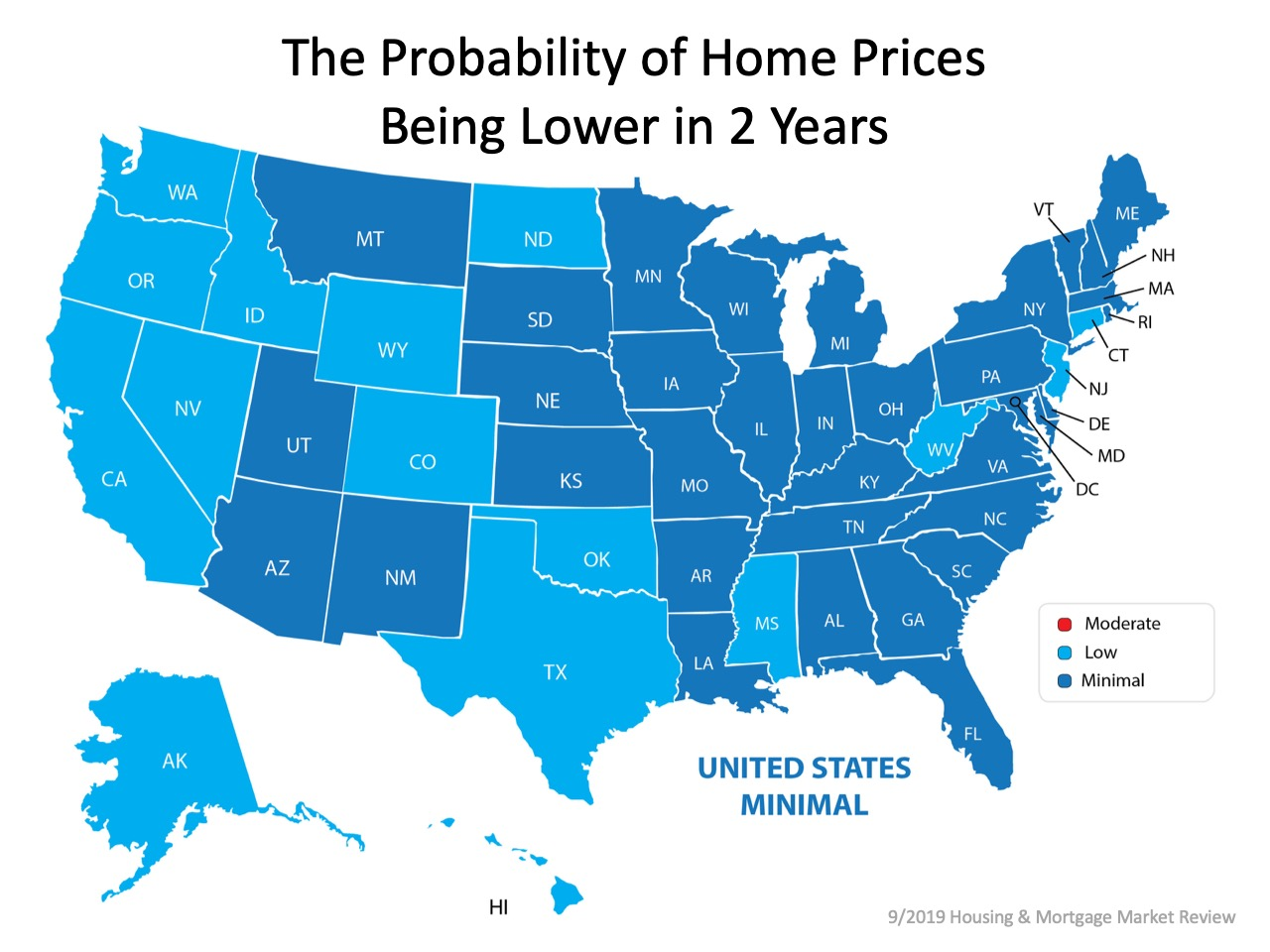 No one can accurately predict when the next recession will occur, but expecting one could possibly take place in the next 18-24 months is understandable. It is, however, important to realize that the impact of a recession on the housing market will in no way resemble 2008. Those waiting for prices to fall before purchasing a home should realize that the probability of that happening anytime soon is very low. With mortgage rates already at near historic lows, now may be the time to act.

Supply and demand is what puts pressure on prices. The current Wasatch Front real estate market reality is that supply is limited and demand is through the roof. We will see where prices go in the next few years but if you are guessing that prices will go down I might recommend against making financial decisions based on that guess.

Context is important. While it’s true the number of foreclosures is higher now than it was last year, foreclosures are still well below pre-pandemic years

Expert Advice for Buying a Home During the Holidays

You can successfully buy a home during the holidays, but you’ll need to change your strategy to get the best results. Here’s how to do it.

How to Make Your Move As Simple As Possible

Delaying listing your home during the last quarter of the year? Read on to learn simple moving company tips that will ease your concerns.

We use cookies to enhance your browsing experience and deliver our services. By continuing to visit this site, you agree to our use of cookies. More info